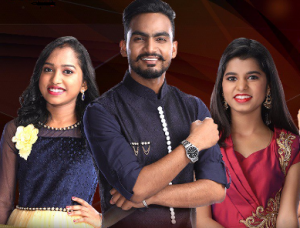 Rising Star India 2017, Today’s episode was just awesome and was full of mixed emotions as on positive side the Top 4 Contestants got a chance to sing with few Bollywood’s best singers.

The episode started with Bannet performance with Master Salim, on Song ‘Dil Da Mamla’. It was a rock on performance. Master Salim soul full voice made it even better. They got 89% of Vote.

Then Next Ankita Kundu came with Singer Neha Bhasin and they sang ‘Kuchh khas hai’ from movie Fashion and it was bang on performance with 80% vote.

To compete with them Vikramjeet singh and Akriti Kakkar came with ‘Marjani Marjani’ and got 85% vote.So, after their performance Bannet with 89% vote i.e was maximum among made his place in Top 3.

Then for the 3rd place in Top 3, face off took place between Ankita Kundu and VikramJeet Singh.Ankita performance on ‘Tere Bina jiya jaye na’ got her 55% and Vikram Jeet Singh got 61%Vote.

Final decision was based on experts vote and they gave their vote to Ankita and Finally Ankita Kundu became the Third Finalist of Rising Star India.